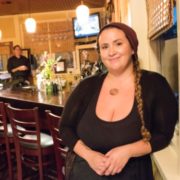 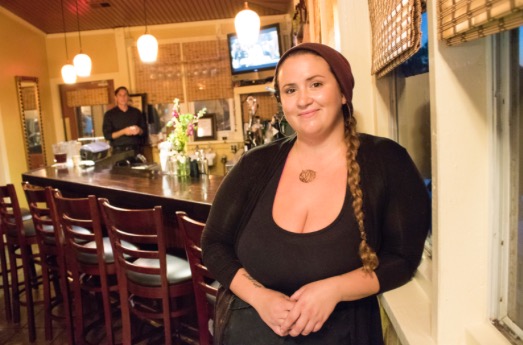 Anne-Marie Marzetti at the bar of her restaurant, La Dolce Vita.

One by one they slipped over to us, gliding, semi-submerged and popping up from under the vegetation that lines the small lagoon. Turtles. Cute box turtles. I counted five. Awkward yet graceful, they came to see what these people were all about.

These people were all about waiting for their table at La Dolce Vita to be readied. We had played a risky hand, driving up from Nags Head to Corolla to visit this Italian eatery we had heard so much about, and we did it without reservations. But this time we were lucky, it was shoulder season, and though all the tables would soon be full, there was one available for us.

And so, as the women in our foursome took a seat on a bench at the edge of the putt-putt course, my buddy and I leaned over the railing and enjoyed this unexpected encounter with wildlife on this bright early evening in May. This was just the first of the happy surprises we encountered.

Soon enough we were called to dinner. 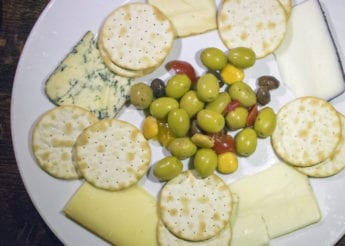 The meal
We ordered our drinks and pondered the menu, settling on a pair of appetizers and a salad to share for a first course. We all shared the cheese plate with five slices of various cheeses, five pairs of crackers all arranged around a mix of olives and fun little Lupini beans. Small, light purple Kalamata-type olives packed a lot of flavor for their wee size. The cheeses were a nice mix of soft, velvety young cheeses, to an aged hard cheese and even a Gorgonzola.

Our fairer halves raved about the special salad, which included a goat cheese, blueberries, pancetta and arugula, my wife’s favorite green. 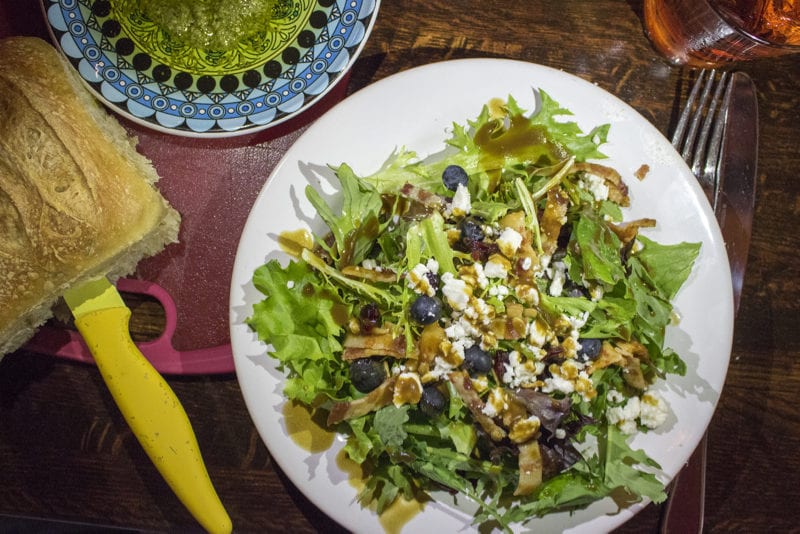 The special salad with blueberries, bacon and feta.

The guys tucked into the crisp, flash fried calamari, made up of tubes and tentacles, dusted with Pecorino-Romano and served with a spicy marinara. I’d rate this as one of my top two versions of fried calamari available in our area.

This round was buoyed with fresh, house-baked bread and what may be the boldest pesto dipping oil around, much to our delight. 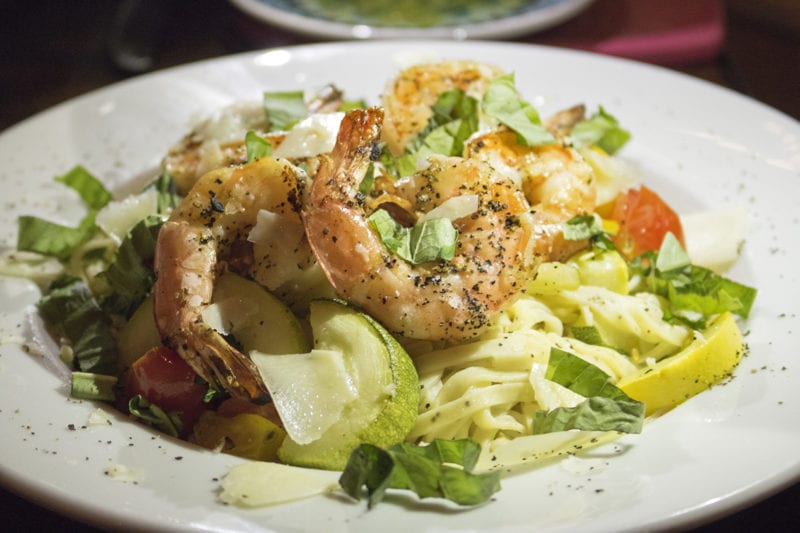 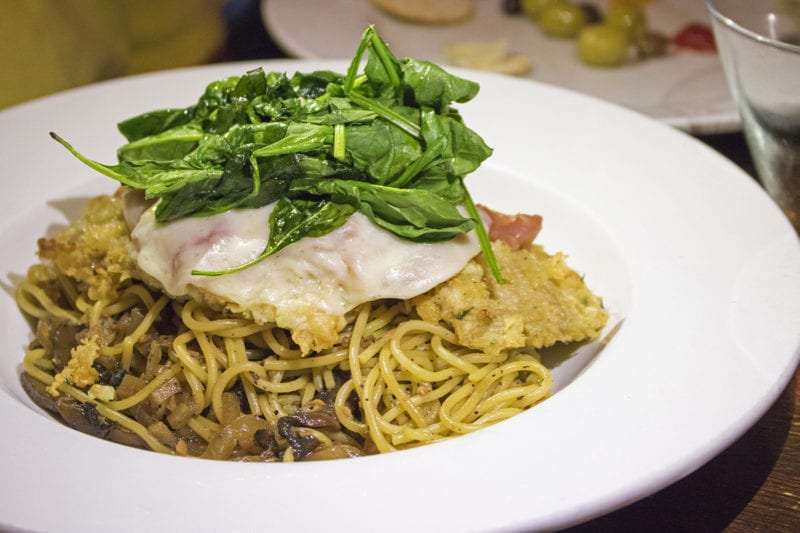 We all traded samples of our entrees. I confess to being a sucker for any dish with “Diablo” in the name. I’m drawn to spicy heat, and the Seafood Diablo here stands up to the moniker. Shrimp, large lump crab and mussels were decked out in a sauce that is at once fiery and savory; spiced from the copious amounts of crushed red pepper and slightly mellowed by the rich marinara bourbon cream sauce. Not for the tame of heart, but one can ask for a less spicy version. I was taken aback by the fullness of the seafood in the mix. It seemed like a good half pound of crab was in there.

My buddy’s dish was Veal Saltimbocca, a breaded veal cutlet with prosciutto, fresh spinach and provolone. This sat atop a nest of spaghetti and was embraced with a rich mushroom sauce. This sauce is memorable even a week or more later because I could taste the time it took to make it, which is to say this was a sauce from a long-reduced veal stock, tippled with sherry, an outstanding dish. 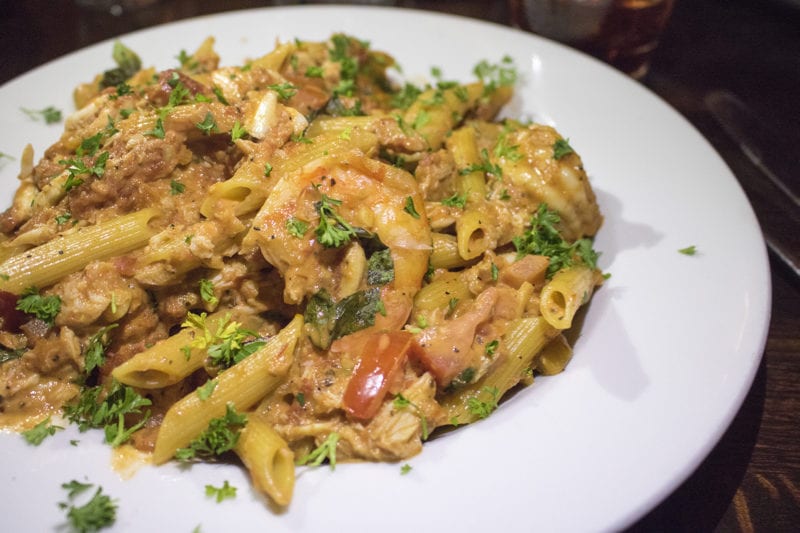 Next up, my wife’s dish was a special for that evening, Black Pepper Pasta. Shrimp were combined with lightly cooked fresh squash, zucchini and tomato in a style some may called “primavera.” This was by comparison a somewhat lighter dish, with more subtle flavors, despite the black pepper mentioned in the name. This was atop linguine.

Lastly, the star of the show was in fact their signature dish. Crab & Shrimp a’ la Penne Vodka is penne pasta in a “sunrise” vodka cream sauce, with fresh diced tomatoes & basil. Again, the dish was chock full of plump shrimp and lump crabmeat, and the vodka sauce showed the same care, time and passion to bring together a lush dish.

Sadly, we simply had no room for dessert, but next time we promise to plan better.

The chat
The chef is the utterly charming Anne-Marie Marzetti. She opened La Dolce Vita eight years ago and co-owns the restaurant with her mother, Barb. We spoke a few days later on the pleasant back deck of the restaurant overlooking the lagoon and those turtles.

“I wanted to do Pacific Rim food, no one was doing it here.” But as she and her team got around to making plans, she reconsidered. “I really didn’t know anything about these spices, like saffron,” she says with a quizzical look. “So, we went back to square one. I’m Italian, I cook Italian, so why am I not making Italian food?”

It is apparent Marzetti is well traveled. I asked where she grew up. “Man, there’s not a short answer for that,” she said, laughing.

Her father’s law career saw the family moving a good bit, both in the United States and abroad. But it was her mother’s parents, Fran and Ed Hutchison and their beach home in Corolla, that provided a constant home port for the family.

“Since my grandparents had a house here since the seventies, this was always where we would come for the summer. I’ve always just felt this was home base. It was the one consistent place.”

When Anne-Marie was a senior in high school, her parents, Al and Barb Marzetti moved to Raleigh. In 2011, her father retired. While they still have a house in Cary, they spend almost all their time here in Corolla where her father is a magistrate. Active in his new career, he is also on the board at Water’s Edge Village School in Corolla. “He also teaches ukulele to the kids,” she says, adding, “My mother is a mile a minute. I definitely get that go-go-go from her. My mother is my hardest critic and my father is my best critic.”

The Italian cooking springs from her father’s parents, who both hail from Italy. “We’d go to my dad’s mom’s house, and she would be up at five am, making bread and pasta for a big Italian family, you know what I mean? Like twelve or thirteen or thirty.” Her mom grew up baking. “So, I took some recipes that were Italian and the what I knew from baking with my mom, and I’ve just been pretty good at cooking.”

“I’m a people pleaser, inherently,” she said. “It makes me happy to make people happy via food. I found something I was good at and I went with it.”

It was a good decision. The restaurant stays busy and is expanding into the unit next door. The new space will have the new entrance, an expanded bar with enough wall space to host 900 bottles of wine. Yes, that reminded us both of that old sing-along-song. Tall tables will accommodate diners in the bar, and it will allow more table space in the dining room. Marzetti recently acquired another outside deck area, were guests can enjoy their dinners al fresco.

We talked a bit about the dedication it takes to make a restaurant successful. A big part is getting the staff to catch the passion and it starts at the top.

“If I’m not behind it, how am I going to get my staff behind it? I need them with me, I want them to want to create too. You want to put that love in to every dish. At the end of the day it’s love, creating that one little moment. “

The restaurant usually opens just before Easter and shutters around Thanksgiving. Lunch runs from 12 p.m. to 3 p.m. Dinner runs from 5 p.m. to 9 p.m. Reservations are only accepted before Memorial Day and after Labor Day. During the high season from Memorial Day to Labor Day, instead of reservations, they offer a call ahead service to place your name on a wait list.

The restaurant is on the west side of the TimBuck II shopping village in Corolla.